Considered the grandfather of satirical anti-war novels like Catch-22, The Good Soldier Švejk is a hilarious yet scathing commentary on the ludicrous absurdity of 20th century Austro-Hungarian bureaucracy. The novel has been translated into over 58 languages and many acknowledge it as one of the greatest masterpieces of satirical writing ever written.

@GSoldierSvejk And so, you certified imbecile & seller of dogs, they’ve killed our Ferdinand… #WW1 #KU_WWI pic.twitter.com/LuxSnnWV7l

For the purposes of the #KU_WWI Twitter Project, we present an abbreviated first chapter of The Good Soldier Švejk in which Švejk (@GSoldierSvejk) learns about the assassination of Archduke Franz Ferdinand (@ArchdukeFranzi) from his cleaning lady, Mrs. Müller (@CharwomanMuller). What is striking about their discussion is its seeming irrelevance to their everyday lives — they are interested in the event, but only in so much as people are when it comes to royalty and scandal.

A lot of other persons’ll have it coming to them too, you know. You mark my words, it’ll be @Tsar_NickyII and Tsarina next… #KU_WWI

The literary tweetenactment tries to be as true to the English translation of the novel as possible, with abbreviation and some artistic license for the 140-character tweet limitation.

The @GoodSoldierSvejk Tweetenactment is meant to represent the greater body of WWI literature, music, and art that would come out of the early part of the 20th century. It is our opinion that history is best understood by exposure to the humanities, and it is our hope that you will be inspired to seek your own copy of The Good Soldier Švejk as a means of better understanding the First World War.

Did you know that the Spencer Museum of Art at the University of Kansas now hosts one of the largest collection of WWI art in the United States? Click here to read an article about the collection.

In the bigger picture of World War I history, what happened in Sarajevo following the assassination of Archduke Franz Ferdinand and Duchess Sophie is often lost. Focus tends to gravitate towards the diplomatic quagmire that would follow in July 1914 eventually leading to a declaration of war that would consume the globe for the next four years (look for #TheWorldReacts blog post next week).

Still, the events in Sarajevo immediately following the assassination of Archduke Franz Ferdinand may be the key to understanding the Balkans in the 20th century. Occurring later in the evening after the #KU_WWI LIVE Tweetenactment on 28 June 2014, the #Sarajevo Tweetenactment explores what happened from the perspectives of Governor of Bosnia Oskar Potiorek (@GovPotiorek1914), Sarajevo city officials Mayor Fehim Effendi Čurčić (@SarajevoMayor) and Police Commissioner Dr. Edmund Gerde (@CommishGerde), and fictional character Dmitrije Stefanovic (@KingofCevapi).

The #Sarajevo Tweetenactment begins with Police Commissioner Gerde describing the anti-Serb violence that had erupted in Sarajevo after the assassination of Archduke Franz Ferdinand. His tweets include actual archival photographs of the destruction.

Word of the assassination spread quickly and violent demonstrations broke out across the Austro-Hungarian empire. Some newspapers would later describe these demonstrations as ethnically based “pogroms.”

The attack on Hotel Evropa, now known as Hotel Europe, occurred as Police Commissioner Gerde describes. The tweetenactment includes this anecdote because the luxurious hotel represented the crème-de-la-crème of Serb-owned businesses in Sarajevo, yet its cultural and economic importance was not enough to keep it safe from anti-Serb violence that day.

As a witness to and innocent bystander in these events, fictional pastry chef Dmitrije Stefanovic references the Schutzkorps in one of his tweets:

Schutzkorps out! Thank God I sent family out to country house earlier. At deli watching over store. #ku_wwi #badtime #tobeaserb

The Schutzkorps was a volunteer militia established by Austro-Hungarian authorities from 1908-1918. Primarily composed of Bosnjaks, the militia’s purpose was to track down pro-Serb opposition within the newly annexed province of Bosnia. The Schutzkorps became synonymous with ethnically based persecution of Serbs in Austria-Hungary, and was said to have been very active during the violence that occurred in Sarajevo after the assassination.

Governor Potiorek ordered hundreds of troops into the streets of Sarajevo, although not necessarily to stop the violence.

@GovPotiorek1914 Aren’t we going to do anything?!! We have to get #Sarajevo under control before more innocents are murdered! #KU_WWI

@CommishGerde Send out the troops. It’s time we eradicate the "subversive elements of this land.” #KU_WWI

Some have argued that Governor Potiorek actively encouraged the violence. But as the demonstrations became even more aggressive on June 29-30, it was Governor Potiorek who declared a state of emergency in Bosnia and finally took back control of Sarajevo. 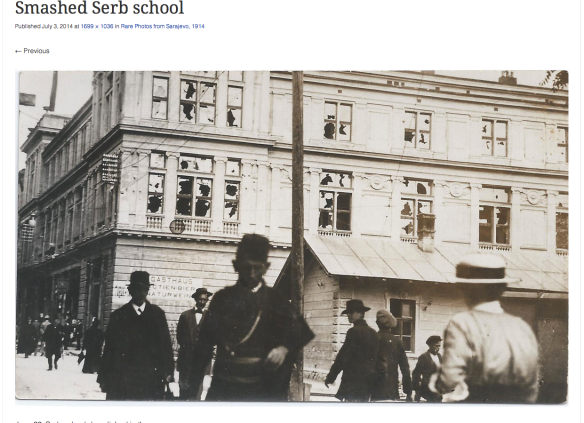 By some accounts, hundreds of Serb business owners were imprisoned, many of them died in prison or were executed by the Schutzkorps (graphic photograph), and about 5,000 Serb families were expelled from Bosnia.

#KU_WWI character Dmitrije Stefanovic’s last three tweets represent the betrayal and alienation many Serbs felt as they lost their livelihoods and homes in this violence.

What is somewhat unique about the #Sarajevo Tweetenactment is that it explores the victimization of Serbs in these events rather than portraying them as WWI aggressors. This is a departure from other #KU_WWI Tweetenactments like #Conspiracy, #IheartBosnia, or the LIVE Tweetenactment in which pro-Serb nationalists conspire and then execute their plan to assassinate Archduke Franz Ferdinand. In doing so, the project presents a more complicated portrait of the nations and nationalities who took part in this war where an individual could be a hero, terrorist, victim, culprit, and victor, all at the same time.

The “fictionality” of the #KU_WWI character Dmitrije Stefanovic also allows us an opportunity to speculate – how do you think these events changed Dima?

For much of the #KU_WWI Tweetenactments, @KingofCevapi has been a politically ambivalent local business owner who seems more interested in creating playlists and talking about his Turkish friend Sulejman.

Was the loss and betrayal experienced by Dima during this violence enough for him to change from a simple shopkeeper into a radicalized nationalist? Did Gavrilo Princip undergo a similar transformation?

Whatever you decide, there is little doubt that the events in Sarajevo on June 28th-30th, both the assassination and the rioting afterwards, contributed to and perpetuated the history of ethnically based violence that would come to dominate the Balkans in the 20th century – just one more legacy of the First World War.