On exhibit at the Spencer Museum of Art, University of Kansas

“At first we could cope; then we were overwhelmed by their numbers. They came in the hundreds, from all directions; some able to walk, others crawling, dragging themselves along the ground.” —Florence Farmborough, Red Cross nurse with the Imperial Russian army at Gorlice on the Eastern Front

Nursing played a crucial role during the First World War. Emergency medical practices evolved enormously during the war years (1914–1918) and thousands more medical workers were involved than in previous wars. New and innovative practices included blood transfusions, the use of antiseptics, local anesthetics, and painkillers. Throughout the War, membership in the American Red Cross grew from 17,000 to more than 20 million and 20,000 registered nurses were recruited for military service. In the United Kingdom, 38,000 members of the Voluntary Aid Detachment served in hospitals or worked as ambulance drivers and cooks. 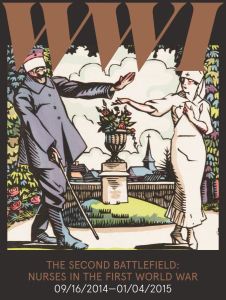