Yesterday at the Watkins Museum, KU Department of Germanic Languages and Literatures Professor Lorie Vanchena shared the why’s and the how’s KU will commemorate World War I over the next four years.  Professor Vanchena, who is also the Director of the European Studies Program, is the chair of the KU Planning Group for WWI Centennial Commemoration Activities 2014-18.  Over 15 academic units on the KU campus have come together to develop WWI centennial programming including: WWI Campus Walking Tour; Film Series; international conference on “Everyday Life on the Eastern Front”; and numerous archival collections and exhibits made open to the public. 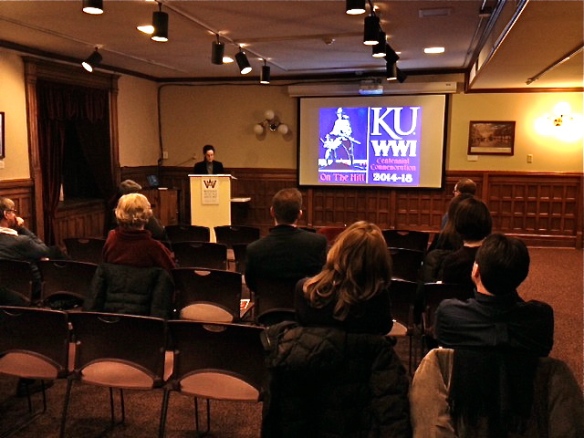 Following Professor Vanchena’s lecture, recent KU graduate, Sam Moore, discussed his work on the KU WWI Twitter Project, a social media e-reenactment of a WWI event loosely based on the successful re-creation of William Quantrill’s raid on Lawrence (#QR1863) staged last August. Working with the KU Center for Russian, East European & Eurasian Studies (CREES), Sam is developing an interdisciplinary guide to understanding the assassination of Archduke Franz Ferdinand, the event often cited as the beginning of WWI.  The guide will enable KU students and members of the community to help write a master script for an e-reenactment, which will tweet in real time on June 28th, 2014, the 100th anniversary of the Archduke’s assassination in Sarajevo.  Sam explained how language classes at KU will translate parts of the script into the languages of the characters involved in the historical event.  Over 40 languages are taught at KU, and this project will include translations of tweets into French, German, Serbian, Czech, Turkish, Russian and more.

Professor Vanchena’s and Sam’s lecture was held as part of the Watkins Museum’s monthly series dedicated to WWI topics. For more information about the museum and next month’s lecture, please visit the Watkins Museum website at: www.watkinsmuseum.org